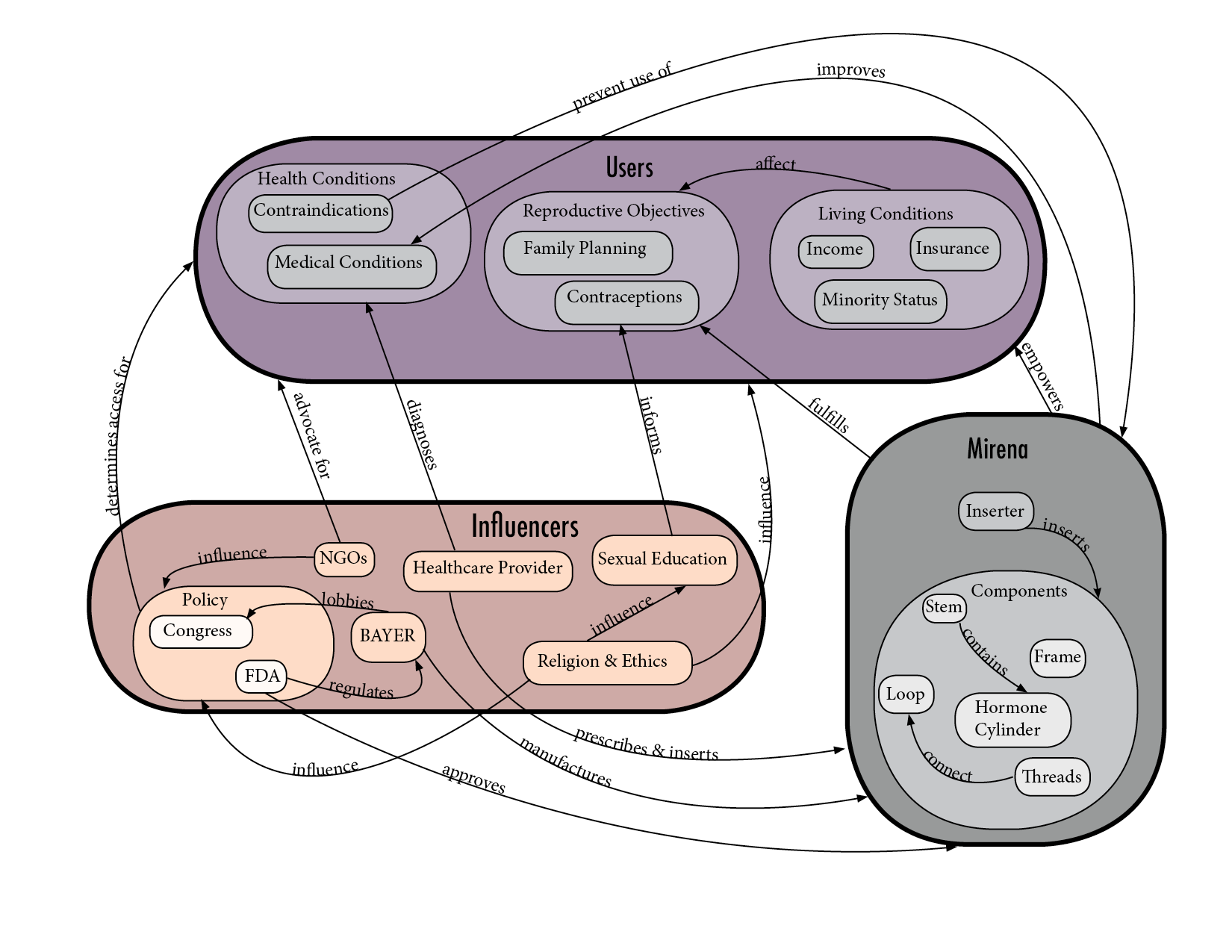 The Mirena intrauterine device is a medical technology that was developed as part of a wider societal shift towards providing women with more autonomy over their bodies and livelihoods. The history of the IUD is fascinating, and shows that the desire to control if and when a woman becomes pregnant has been a driving force behind the development of intrauterine methods of contraception for centuries.

The heart of the socio-technical system of the Mirena IUD is the user. A user’s body is a critical aspect of the system– their medical history, any conditions they have that might be contraindicated for Mirena, and their ability to exercise autonomy over their reproductive health are all central to whether Mirena can play a role in the larger landscape of birth control methods.

But beyond the user’s physical health, there are socio-economic factors that can further affect whether Mirena can be used. Mirena itself costs around $700-800, with an additional $300 insertion fee, bringing the total to approximately $1,100 (Amino 2016). For many women this can be prohibitively expensive. Fortunately, many birth control methods including IUDs are covered by most health insurance plans, and also on Medicaid, bringing the costs down substantially (Planned Parenthood). Planned Parenthood offers reduced costs for patients based on their income level, so those who aren’t covered by insurance are still able to have access to an IUD.

Clearly, another important component in the system are the clinics and healthcare providers that are able to prescribe and insert Mirena, and the user’s proximity to these resources. Mirena must be inserted in a clinic setting, so its use requires access to trained healthcare providers. These clinics, including places like Planned Parenthood, offer the patient information about Mirena (including side effects), carry out the insertion, and provide follow up care in case something goes wrong. They are also the sites where Mirena is removed.

Bayer AG is a multinational pharmaceutical and life sciences company based in Germany. One of its divisions, Bayer Pharmaceuticals, is responsible for the development of Mirena as well as many other prescription drugs. Bayer operates its own productions sites where active ingredients are manufactured, and formulation as well as packaging are performed at Bayer’s own sites, too (Bayer 2016). In 2017, Open Secrets reports that Bayer AG spent $9.4 million on pharmaceutical and health product-related lobbying, this is consistent with an industry-wide surge in lobbying spending by pharmaceutical companies since President Trump came into office. As such, the influence of pharmaceutical companies on politics is an important aspect of the socio-technical system of Mirena. Often, these connections are hidden from public view and therefore the impact of spending on drug approval and other factors that patients would benefit from knowing more about are actually difficult to find.

On the other hand, social relations affect this technology as well. Religious beliefs and moral traditions prevent large groups of women from having access to this technology. More specifically, religious groups that advocate against abortion and against birth control in general, have a big impact in many areas of the system: the policy makers and laws, health care providers, and users as well. This translates to politics when bills are passed either banning or limiting it based on medical research, economic impact, religious beliefs and systemic oppression of women’s role in society. After the November 2016 election, data from the AthenaHealth network showed that out of one million doctor’s visits between October and December 2016, visits for IUD management or insertion rose about 19%. (Athena Insight 2017) This was due to concerns that abortion access may be threatened under the Trump administration, and IUDs are long-acting reversible contraceptives, with Mirena approved for use for up to 6 years.

Social relations can also affect the way a technology is used, an example of this concerns the removal threads attached to a loop at the bottom of the hormone cylinder on the main stem of the IUD. The primary function of these threads are for the healthcare provider to remove the IUD in a clinic setting, but they have a secondary use, too. Mirena users are encouraged to perform monthly self-checks by feeling for the threads to ensure the Mirena is still in place and has not been expelled accidentally. At insertion, the threads are cut so that they aren’t too long and  uncomfortable, but they are long enough so that the user can perform these monthly checks. Research conducted by the University of Hawaii shows that only 46% of IUD users surveyed said they were willing and able to feel the threads themselves. The researchers concluded that repeatedly reminding people to perform these checks may not be useful if there are other barriers preventing them from doing this.

The widespread use of this technology changed the human sexual landscape forever and its effect in society reach so far it is almost impossible to measure. “It reduced the risk of unintended pregnancy in the context of the sexual revolution of the ’60s and established family planning as the cultural norm for the U.S. and in many other countries of the world” (Planned Parenthood).

Melo, Juliana, et al. 2017. “Women’s willingness and ability to feel the strings of their intrauterine device.” In International Journal of Gynecology & Obstetrics. https://doi.org/10.1002/ijgo.12130

Vanvuren, Christina. 2016. “How Much Does a Mirena IUD Cost?” Amino. https://amino.com/blog/mirena-iud-cost