The Mirena intrauterine device (IUD) is a contraceptive technology that is inserted by a healthcare professional into a uterus during a clinical visit. Mirena is T-shaped and the entire body is 1.26 inches in both horizontal and vertical directions. The T-shaped frame is made of polyethylene and consists of horizontal “arms” and a vertical stem, designed to fit the shape of the uterus. 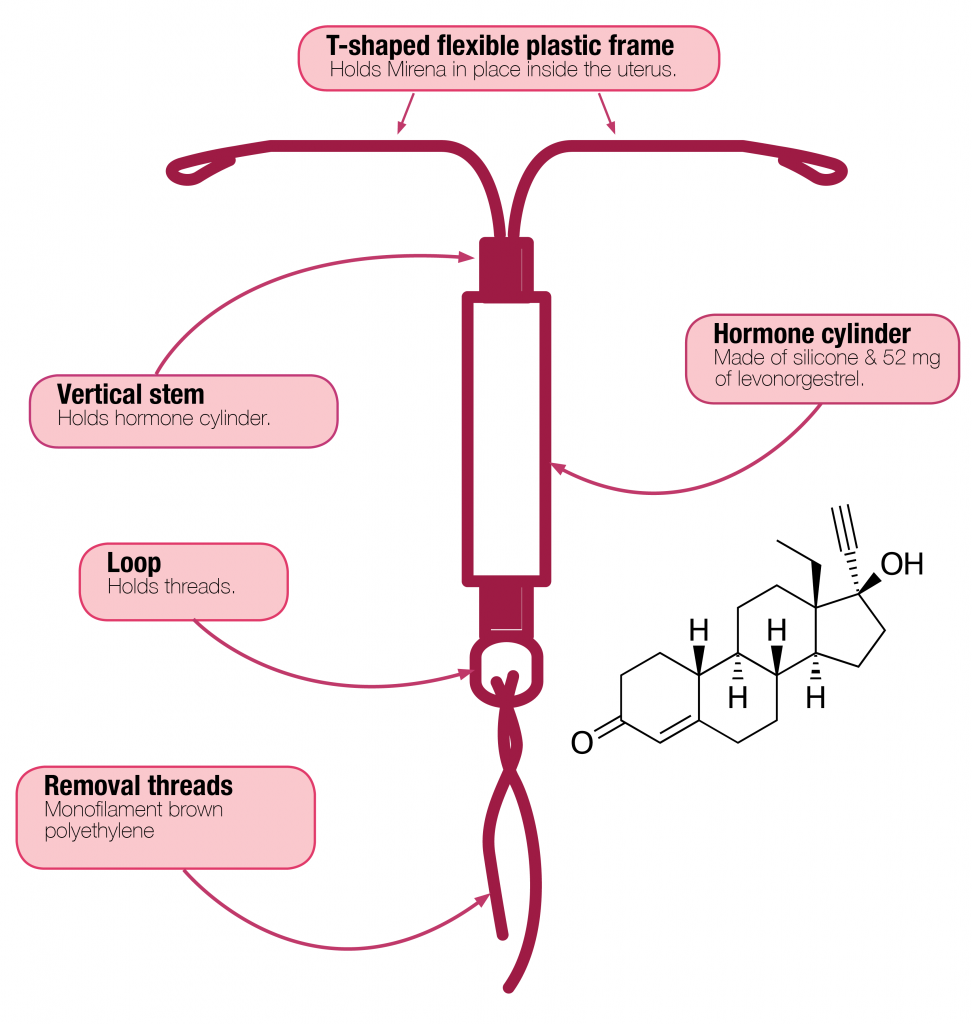 The frame is compounded with barium sulphate, which makes it radiopaque. Radiopacity is a property that means something is impenetrable by radiation and therefore visible on x-rays. This is useful if a doctor ever needs to verify that Mirena is in place or detect whether it has moved.

The vertical stem contains the steroid reservoir, which is a hormone elastomer core. It is made up of an almost-white cylinder made of a mixture of levonorgestrel and silicone (polydimethylsiloxane). Silicones are often used in drug delivery devices and polydimethylsiloxane coatings are often used for controlled drug release. The cylinder contains 52 mg levonorgestrel, a progestin. Progestin is a synthetic hormone which mimics progesterone, a hormone that is produced naturally in the adrenal glands and ovaries.

The contraceptive effects of levonorgestrel, or the properties of progestin that make it effective at preventing pregnancy, include increasing the thickness of cervical mucus which prevents sperm from reaching the uterus, preventing the ovaries from releasing eggs, and impeding the development of the endometrium (also known as the uterine lining), so that it does not thicken and a fertilized egg cannot embed within it.

Progestin also prevents cysts and other tissue from forming, which also makes it an effective treatment for polycystic ovarian syndrome (PCOS) and endometriosis. The release of levonorgestrel can also treat menorrhagia (heavy menstrual bleeding), as after three months the reduction in the buildup of the uterine lining leads to a reduction in menstrual bleeding.

Mirena’s hormone cylinder dissolves and incrementally releases levonorgestrel into the uterus at a rate of approximately 20 μg/day and decreases gradually to half that value after 5 years. This is much lower than many oral contraceptives such as the birth control pill. Once in place, Mirena is said to be effective for up to 7 years. It’s architecture and chemical composition mean that Mirena is a reversible birth control method; because of the low level of hormones, a person can try to become pregnant the day Mirena is removed.

Another feature of Mirena is the monofilament brown polyethylene threads attached to a loop at the end of the vertical stem of the T-body. Its primary function is as a removal mechanism. It is advised that Mirena is removed by a healthcare professional, who pulls on the threads, causing the T-shaped arms to fold in, and the IUD to be removed. The polyethylene of the removal threads contains iron oxide as a colorant. The removal threads also serve as a way to self-check whether Mirena is in place, which should be done monthly.